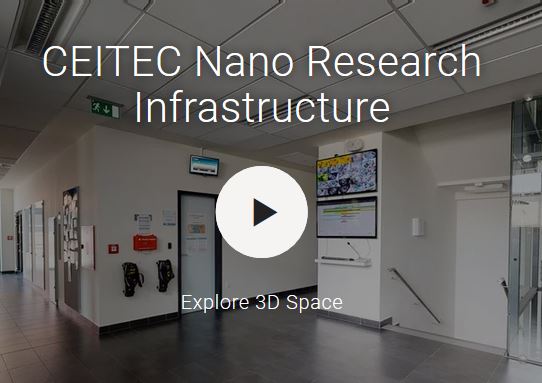 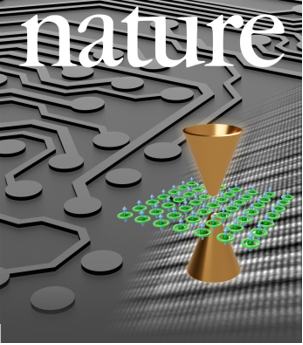 New effects in solid-state physics are often first discovered at temperatures near absolute zero (0 Kelvin or -273 °C). Further research can then determine whether and how these phenomena can be induced at room temperature as well. So it was that superconductivity was initially observed in mercury below 4 Kelvin more than 100 years ago. Today, there are many high-temperature superconductors that conduct electrical current without resistive losses at temperatures as high as 138 Kelvin or even 200 Kelvin (the record held by H2S).

The Quantised Anomalous Hall Effect (QAHE) was observed for the first time in a magnetically doped topological insulator below 50 millikelvin in 2013. Similar to superconductivity, this effect allows lossless charge transport within thin edge channels of the samples. Meanwhile, it has been achieved to increase the maximum temperature at which the effect can be observed up to about 1 Kelvin.

However, based on theoretical considerations, the QAHE should occur at much higher temperatures. So it is a mystery as to why this does not happen. One critical parameter is known as the magnetic energy gap of the sample, but no one has ever measured it before. The larger this gap, the more stable the effect should be towards the influence of temperature.

The international team headed by Prof. Oliver Rader from Helmholtz-Zentrum Berlin and Prof. Gunther Springholz from the University of Linz has achieved a breakthrough. By angle-resolved photoemission spectroscopy (ARPES) with synchrotron radiation of BESSY II they have been able to measure the energy gap in such a sample for the first time. To accomplish this, the equipment named ARPES1cube was used to reach extremely low temperatures as well as the new spin-resolving capability of the Russian-German Laboratory at BESSY II. Surprisingly, the gap was actually five times larger than theoretically predicted 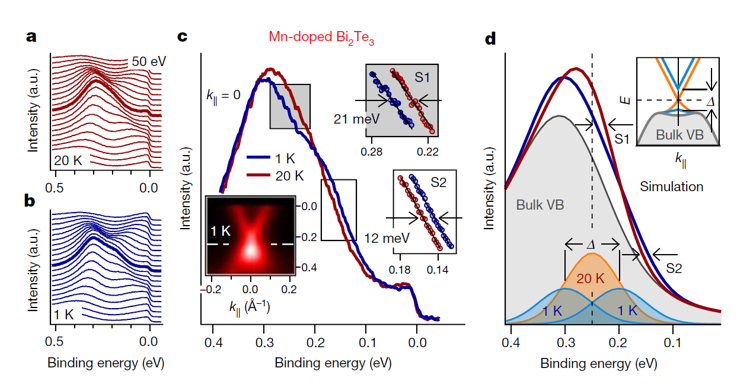 Figure 1: ARPES for Bi2Te3 with 6% Mn, above and below the Curie temperature (TC) of around 10 K. The spectra in c, d and those marked by thick lines in a, b correspond to the centre of the surface Brillouin zone at k∥ = 0. Line fits in the regions S1 and S2 in c yield a splitting of more than 33 meV between 20 K and 1 K; according to the simulations shown in d, this splitting corresponds to a magnetic gap, Δ, of 90 ± 10 meV. The inset in c shows the energy, E, versus k∥ momentum map at 1 K. a.u., arbitrary units. VB, valence band. © G. Springholz at al./Uni Linz

The scientists also found a simple reason for this result: Thanks to used microanalytical methods, including high-resolution scanning transmission electron microscopy (HR-STEM) and X-ray diffraction performed in CEITEC Nano by Jan Michalička and Ondřej Caha, respectively, it is now know that manganese doping does not happen in a disordered manner. On the contrary, it causes stratification known as a superstructure in the material. By adding a few percent of manganese, alternating units of septuple and quintuple layers are created (Figure 2). This causes the manganese to be preferentially contained within the septuple-layer units (Figure 3) and thus can generate the energy gap much more effectively. 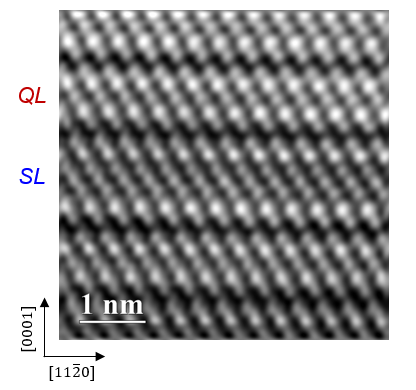 Figure 3: Atomic-layer-resolved distribution of the Bi, Te and Mn atoms of a Mn-doped Bi2Te3 film (xMn = 10%) obtained by STEM-EDX mapping. The Mn atoms are predominantly incorporated in the centre of the septuple layers and to a lesser extent in the outer layers of the septuple units. No Mn is seen in the van der Waals gaps. © G. Kothleitner et al./ Graz University of Technology

In retrospective thinking, the researchers' imaginations in using dopants have not extended far enough to date. They used trivalent elements such as chromium and vanadium that have magnetic characteristics to substitute for the bismuth in bismuth telluride (Bi2Te3), with the dopant atoms in a disordered state. The reason for this seemed very convincing: trivalent magnetic elements contribute three electrons to chemical bonds and their chemical valence leads these elements to the bismuth sites. With manganese, the situation is different. Since manganese is divalent, it does not really fit well in the bismuth sites. That is apparently why the system becomes radically restructured and creates a new double layer of atoms in which manganese can be divalently incorporated. In this way, a structure is created – in a self-organized way - in which manganese can produce the large magnetic energy gap.

If these self-organisation phenomena are exploited in specific ways, then completely new configurations can emerge for magnetic topological materials, according to the authors. In principle, the gap that has now been measured is already so large that it should enable construction of a near-room-temperature QAHE from appropriate components. However, other parameters still need to be improved. A magnetic topological insulator like this in combination with an ordinary superconductor could also permit the realisation of a quantum processing unit (Qbit) for a quantum computer.

We are pleased to inform you that this article " Large magnetic gap at the Dirac point in Bi2Te3/MnBi2Te4 heterostructures" is published online in Nature. Use the following SharedIt link: